The Evolution of ThinkFun's Math Dice ThinkFun has come a long way since its inception over 30 years ago and its games have also evolved over the years. Math Dice, for example, is one of our most popular mental math games! The concept came from a child and has grown into a nationwide activity enjoyed by teachers and students across the country. Here's a look into the evolution of one of our most beloved games. Math Dice is ThinkFun’s best mental math game and a favorite for teachers to use in the classroom due to its ability to help students build math fluency. Here’s how to play: the two 12-sided dice are the target dice. A player rolls those two dice and then multiplies the two numbers they get in order to have the target number. A player then rolls the three 6-sided dice—these are the scoring dice. Using any mathematical expression, players use the numbers from the three scoring dice in order to create an equation that equals the target number, or the closest to the target number, before their opponent. Players must be quick with creating their equations and they must explain their equation after stating the number that they can hit using the scoring dice. If a player’s equation is wrong, they can’t get the point or win the round. When a winner has been decided, they can roll the dice again to play a new round.

The story of this fun game for kids began with a kid named Sam Ritchie, son of ThinkFun co-founders Bill Ritchie and Andrea Barthello. Sam was in 6th grade when he was assigned a project that required him to invent a math game. Being a procrastinator, as most middle schoolers are, he waited until the last minute before he took two 12-sided dice and three 6-sided dice and created the game we now know as Math Dice. This game functioned identically as Math Dice, although when it was first created, it was called “Dice Mania.” Even after receiving a high mark on his project, Sam continued to play Math Dice at home and with his friends. It was then that Bill Ritchie was inspired to bring the game to the ThinkFun team and eventually to bring the game to market. The decision to do this was not only because the game was engaging and fun but also because, as Bill stated, “It was around this time that I was thinking about what ThinkFun could do beyond just creating new products. I thought a lot about how games could be used in the classroom.” This thought would mark the beginning of ThinkFun’s education games—a shift in the product line from just brainteasers and puzzles to games that could be used in an educational context.

In 2003, a year before ThinkFun released Math Dice, the first Math Dice Tournament was held. The tournament was run by Bill and the participants were 6th grade students from Maret School in Washington, D.C. that went head-to-head against 6th grade students from Burgundy Farm Country Day School in Alexandria, VA. The event was a huge success and the kids had a blast playing Math Dice in this competitive format. Bill recalled the energy of the day as being “filled with positive emotions. The most intense part of the tournament was when all the kids gathered around to watch the two finalists play in the playoff. When a winner was announced, the room was filled with cheers and the winner was hoisted up in the arms of his teammates.” It was in that moment that Bill knew he was onto something big with Math Dice. The events that followed the first tournament in 2003 were important to Math Dice history. The first event was that Bill received a letter from, Bob Hazen, a math teacher and long-time fan of ThinkFun who had brought several copies of Math Dice with him to teach students in Africa. The students responded well to it and loved to play Math Dice—Bob wrote about his experience and also suggested a format for Math Dice Tournament that would allow for everyone to play at all times. Bill was thrilled about this and wrote back asking if he could use this idea for what he was developing with Math Dice. Bill knew this would be a great addition to Math Dice Tournaments, as he had noticed that during the Burgundy-Maret Tournament, which functioned like a ladder tournament, kids didn’t get to play or have as much fun once they were eliminated. The second event that followed was the second Math Dice Tournament ever held in 2004—this tournament was held between seven schools from Alexandria, VA. Over 40 kids attended the tournament which was held at a local Barnes & Noble store. The event was a huge hit and caught the attention of the head of curriculum at Arlington county schools in Virginia. She decided that she wanted a tournament to be held for Arlington schools and, since then, Arlington has host their own annual, district-wide Math Dice Tournament. May 5th, 2018 marked Arlington’s 15th annual Math Dice Tournament in which seven 5th grade students from 23 Arlington public schools showed up at 8:15am on a Saturday just to play Math Dice.

While there have been other Math Dice games such as Math Dice Jr. and Math Dice Chase, it’s always been the classic Math Dice that has interested Bill the most—particularly because of Math Dice Tournaments. In 2017, Bill dedicated his efforts to creating a program that would allow teachers to host their own Math Dice Tournaments; he wanted to create a website that would include instructions on how to host a tournament, generate player station cards, and provide discounted dice for teachers to use for the tournament. It would give teachers all the materials needed to host their own tournament like Arlington had for years.

In 2018, the Math Dice Tournament Program was rolled out on a website called www.MathDice.com in which any teacher can host their own Math Dice Tournament and the tournament can match the size of the classroom as well as the time frame that the teacher is working with. The website has easy-to-print materials, such as the Player Station cards and the Player Scorecards, as well as presentation materials that introduce the rules of Math Dice and an introduction to how a Math Dice Tournament works. The website also features pencil and paper activities, such as Math Dice Bowling and Math Dice Blackout, that are super fun and can be used as a warm-up exercises for students. This program is open to any interested teacher and the best part is that those who join the program are eligible to receive a great discount on ordering a classroom set of Math Dice. Interested educators can learn more by visiting the Math Dice website or by emailing education@thinkfun.com. 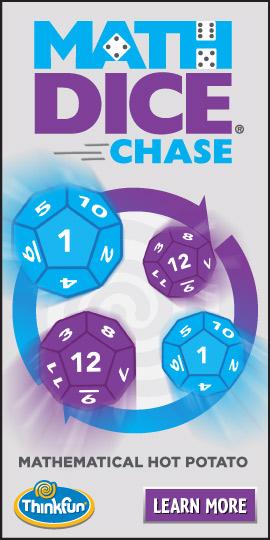