Logic Games: A Look at How We Got Here At this point in educational history, no one would blink an eye if you said you were working on your logic skills. Logic, after all, is (rightfully) seen as a foundational critical thinking skill that helps us function effectively across many different areas of life.

If we do take issue with logic, it’s often to point out just how difficult it can be to master. For example, the inclusion of a logic game section on the LSAT — the national examination for lawyers — has been pointed at as a source of socioeconomic disparity. “The section relies heavily on formal logic, a concept rarely taught outside of high-level college mathematics or philosophy courses,” writes Caroline Kitchener in an article for The Atlantic. Aspiring attorneys often hire private tutors to walk them through the training for this section of the test, a highly visual set of tricky puzzles that tend to be an area where test-takers can see huge gains with enough practice — and the time and money to commit to it.

The rise of logic games

Perhaps the rise of logic games in all their various forms is a kind of trickle-down effect from the inclusion of these types of formal logic examinations in upper-level academia. Perhaps, on the other hand, it simply taps into an innate human desire for facing puzzling challenges and coming up with the right answer. After all, most games — especially the most popular and re-playable ones — offer a challenge, and we typically spend at least as much time frustrated while playing as we do happy and content.

To understand our fascination with logic games, it helps to first understand what, exactly, logic is. As the Stanford Encyclopedia of Philosophy explains, logic is today considered both a branch of mathematics and a branch of philosophy, and courses offered in either department will share a lot of overlap. In this way, logic helps us see the interconnectedness of ways of knowing. The reason this overlap can exist so easily is that logic is a systematic way to use symbols (which can be mathematical or linguistic) to check for validity of a statement. As for turning this systematic way of thinking into a game, well, we have Lewis Carroll to thank for that! The famed writer of Alice’s Adventures in Wonderland was famously a fan of both logical deduction and nonsense, and both featured heavily in his writing. As Marcel Danesi puts it for Psychology Today, Carroll was “especially captivated by the ability of puzzles to impose a peculiar kind of ordered thinking on the erratic and capricious human mind.”

Carroll invented many puzzles to help teach this kind of deductive thinking. One of his contributions was the doublet puzzle, a game in which the player turns one word into another word by changing one letter at a time. The tricky part is that each change must subsequently make a valid word on its own. Accomplishing the feat in the least number of links helps promote logical thinking, but it also often requires an advanced vocabulary in order to know which words are possible along the way. Carroll used his writing as a way to share and popularize these kinds of challenges.

Another popular logic puzzle is the so-called “Zebra puzzle.” This puzzle got its name because the final question (and one that must be solved to get the puzzle correct) is “Who owns the zebra?” Prior to this, puzzlers are given a set of clues such as “There are five houses” and “The green house is immediately to the right of the ivory house.” Through process of elimination and following the ordered rules of the information, the puzzler can eventually deduce who, indeed, owns the zebra. A version of this particular puzzle was published in Life International in 1962.

Often, these kinds of puzzles come with a grid to fill out to help keep all of the information straight and show the process of elimination in action. One major draw is that there is no guessing. The information to figure it out is all right there on the page — if one knows how to think about it properly. In this way, these kinds of logic puzzles can feel democratizing. They don’t require specialized knowledge, skillful dexterity, or pronounced strength. We all have the same information before us, and all we have to do is think about it to get the answer. The rise in popularity of these kinds of brain teasers has been explosive, thanks in large part to computers. Creating a logic puzzle requires a precise kind of thinking that checks for accuracy and uses patterns to create clues. Computers are particularly good at this kind of “thinking,” and the rise of coding as a skill has made these connections even more apparent.

One popular logic puzzle craze has been Sudoku. While the name Sudoku has tricked some into believing it has ancient Eastern roots, the puzzle is actually a variation of “magic squares” thought up by mathematician Leonhard Euler in 1783. It wasn’t until the 1970s that it gained popularity as a puzzle completed for fun. As David Smith writes for The Guardian, the Dell Puzzle Magazine began publishing “The Number Puzzle” sometime around 1979. Japanese publisher Nikoli made some tweaks to the format and began churning out their own version in Japan in 1984. The number puzzles were particularly popular there because the Japanese letter system isn’t suited to crossword puzzles — another popular form of logic puzzle, albeit one that requires quite a bit of cultural (and pop cultural) knowledge to solve. The name was changed to Suduko (meaning, roughly, “unique number.”)

Logical thinking is a skill that can be developed through practice, and the practice has proven itself to be captivating and fun.

Today, logic puzzles have made their way into popular board games. Games like Logic Dots, Cat Crimes, Dog Crimes, and Chocolate Fix take the logic puzzle format and make it accessible and interesting to even more audiences. Michelle Parrinello-Cason, PhD is an educator and homeschooling mom who teaches writing and humanities classes for homeschoolers. As the founder of Dayla Learning and co-founder of SEA Online Classes, she creates curricula and online classes for engaging learners in meaningful and fun ways.

Are you a former or current educator who is interested in guest blogging for ThinkFun? Please contact us for more information. You could be featured in our next blog post and TeachFun e-newsletter! 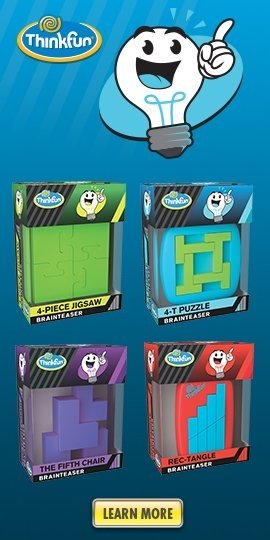