Changing the Game: 5 Tips for Encouraging Critical Thinking About Games

In this time of staying at home, parents are now called on to be teachers. But kids are easily bored. And most of us are not trained to be teachers. So how can we keep our kids fully engaged in learning in a way that works for the whole family?

Here’s an idea: Hold a weekly family game night. Games are a great way to connect as a family. And kids enjoy playing games.

The best games for family game night are ones that kids and adults enjoy equally. Some examples to consider: Card and board games, and puzzles like jigsaw puzzles, crosswords and Sudoku. Some electronic games work, but physical games are often better for encouraging discussion. Read game reviews, and add new games to your collection, just as you would new movies. The indie board game world has exploded in recent times, and stunning new games appear as often as new films on Netflix.

Learning to follow rules is a valuable skill, but children love changing rules. Listen to young children playing a game and you will often hear them spend more time discussing the rules than actually playing the game. Here are five tips for engaging kids in critical and creative thinking by building on their desire to change the rules. You don’t have to play a game the same way every time. Many games come with suggestions for alternative ways to play. And most game-playing families have traditions of “house rules.” Before you play a game, discuss possible rule changes, then agree on what rules you will follow today.

>> For a treasure trove of house rules, see New Rules for Classic Games.

Just as authors borrow ideas from other stories, so game designers borrow ideas from other games. That is especially true in the world of electronic games, where new versions of popular games are released every year. Compare games, and discuss how the same themes have been treated in different games. This is the same sort of critical thinking English teachers encourage when they ask students to compare two books.

>> Expand your knowledge of games by reading reviews of new family games on sites like Wirecutter.

You can go beyond the house rules to create entirely new variations on familiar games. Here are some ideas for things to change in a game.

>> Want to hear how a board game designer actually designs a game? Here are Ten steps to design a tabletop game. When you are reading a book to your child at night, good questions to ask are what the child thinks will happen next, and why the author made a particular choice, such as the wording of a description, or the action of a character. These questions help the child become aware of the conventions of storytelling, and the decisions that a writer makes.

The same sorts of questions work for games. When you are explaining the rules of a game, ask the child why the game designer introduced a particular rule, especially if it sounds strange. Often games include peculiar rules designed to handle particular cases. For instance, at the end of a Scrabble game, the first player to get rid of all their tiles ends the game and the other players subtract the values of their tiles from their score. Why the subtraction?

>> Read the stories of how games were created to get insights into why the rules are the way they are. Read Pass Go and Collect $200: The Real Story of How Monopoly Was Invented TIP 5. What’s wrong with this game?

As a game designer, I often get ideas for new games by studying old games. One of the most productive questions for me is to ask what’s wrong with a game, and how I could improve it. For instance, Scrabble is a great game, but it is slow, and the board tends to get clogged near the end, making it hard to move. This has prompted many game designers to create new faster-paced word games.

>> Here’s an interesting critique of Scrabble and how to fix it: Does Scrabble Need to be Fixed.

Learning to play by the rules is valuable. But changing the rules can be even more valuable — as long as you don’t just tear down the rules, but try to build better rules. Changing the rules helps you understand how a game works, and think critically about how a game designer thinks, just as changing a story helps you understand how a story works, and think critically about how an author thinks. So, if you have a child who loves making up their own rules, you just might have a budding game designer on your hands.

Scott Kim lives in Burlingame, California with his family. His lifelong passion for learning through play and the arts led him to get a BA in music and an interdisciplinary PhD in computers and graphic design from Stanford University. He and his wife Amy Jo Kim run gamethinking.io, which assists product teams all over the world in bringing their innovative product ideas to life. Recently he helped design innovative math games for abcmouse.com. He is now running a free weekly online math game event for kids at mathmonday.net. 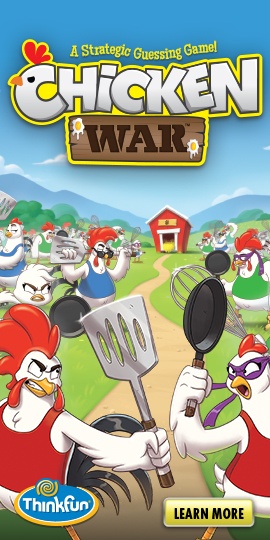