Our staff members are a pretty fun bunch and we love pets; we even have a sense of humor about non-traditional ones!  You may have also noticed that one of our pets was appointed Chief Executive 'Paw-fficer' for April Fool's Day.  Our company would not be where it is today without the loyalty, support, and enthusiasm from our beloved pets.  In our latest blog post series, we open up our company doors to give fans a chance to meet the non-traditional pets of ThinkFun! "Don't take me for granite."

Favorite activity: Guarding papers, sunbathing, hanging out with his friends, Paper and Scissors.

What would its favorite ThinkFun game be and why: WordARound. Why? Because he’s surrounded by words on his paper pile. He can spot words that are tricky to read!

Back story and fun facts: Rocky was found discovered by a ThinkFun staff member while doing laundry at home.  It was determined that he was her son’s pet rock from an outdoor adventure. Luck and excellent timing by his new owner saved him from hitting rock bottom. Favorite food: All fruits and vegetables, and of course crickets and mealworms

Favorite activity: Bathing in her water

What would its favorite ThinkFun game be and why: Robot Turtles because she is a turtle!  She also likes the turtle noises people make when playing, she thinks it’s interesting to hear what people think turtles sound like.

Back story and fun facts: Tippy was found in 2010 crossing the street in Fort Washington, MD which is how she got her name.  Her owner's brother was driving, stopped the car and said, “Hey look a baby turtle!  Charles (the owner's oldest son) would like this!"  Tippy's hitch-hiking days were over right there and then.  She was picked up and taken to her new home and has been cared for ever since. She was later determined to be a female box turtle. Back story and fun facts: Hunter is a rescue—his previous owner didn’t want him anymore so he was lovingly adopted by a talented plant lady and raised as her own. He used to be just a little baby plant but now he’s big and strong. They grow up so fast! "What is the biggest moth in the world? A mamMOTH!"

Favorite activity: Watching TV. It’s annoying though, because he likes to sit on the screen when he’s watching. His owner lets him watch TV when she's gone and then when it's her turn to watch she turns on the bathroom light and locks him in there. Don’t worry, he’s perfectly happy watching the bathroom light too!

What would its favorite ThinkFun game be and why: Laser Maze. Mothball can’t get enough of lasers.

Back story and fun facts: Mothball was resuced from a front porch about a week and a half ago. He doesn’t like to be pet and doesn’t like to be caught. He’s a free spirit and his owner totally respects that. As of right now, she's not entirely sure where he is in the house. He may have been eaten by her cat, or contemplating independently about the latest Game of Thrones episode. If so, his owner can at least feel good about doing the right thing by taking him in off the mean streets of Alexandria, VA. Oh, and his favorite color is red.

Stay tuned for the next post in this series by following us on social media.  The last installment in this series will feature our cats, as we get ready to debut our new game Cat Crimes!  We hope you enjoy this series as much as we enjoyed writing it. 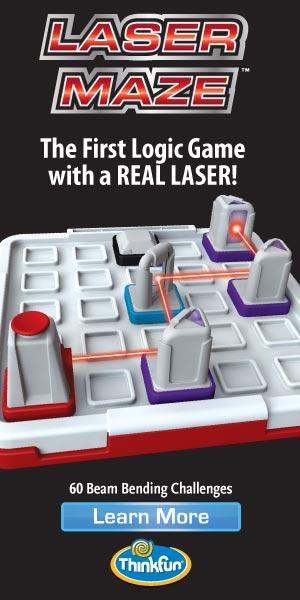