For most people, the most accessible route to a computer science education will be, well, the education system. Sadly, as education funding has continued to dry up, so has curriculum creativity and extracurricular activity.  So what can you do to get your child up to speed in coding while we wait for schools to catch up?

We believe the best way to teach these concepts is not to teach them at all, but to instill them in children through addictive fun. From day one we’ve tried to teach critical reasoning skills and logical thinking with games like Rush Hour, Chocolate Fix, and Gravity Maze.

Computer science skills were once seen as something reserved for only a select group – unattainable for the everyday person, and un-learnable in school.  Today, CS is becoming one of the most popular fields of work and study, with more demand for the computer science education of younger children, especially girls, than ever. Parents, students, and educators around the country are starting to take coding more seriously and are pushing for it to become a common core subject in schools. What’s being called the “code literacy movement” or “kids and coding” is booming, with everyone from Fortune 500 companies to the United States government working to bring programming to just about everyone.

Mark Engelberg, former NASA programmer and inventor of the soon to be released Code Master (learn more below about how this game will help kids learn to code) believes that the key ingredient for a child’s success in computer science is an understanding of logic, and the ability to “think like a computer”, i.e. in a logic-based, step by step fashion. Interestingly, he also writes that “mathematical logic helps [students] in seemingly unrelated courses, e.g. essay writing, debate, and pre-law.” That’s where logic puzzles and games, like Rush Hour, come in. Teaching the skills that form the foundation of computer science education specifically is a huge passion for us – there’s a family connection here. ThinkFun’s founder, Bill Ritchie, had an older brother named Dennis. Dennis Ritchie wrote the C programming language, and, along with Ken Thompson, built the UNIX operating system. The book they wrote, “The C Programming Language”, sits on the shelf of almost anyone who has tried to learn to code. The significance of his achievements can’t be overstated – Dennis has been called “the most important coder in the history of programming” and here you can read a Wired article that outlines the connections between ThinkFun, Dennis, and Dan Shapiro, inventor of the coding board game Robot Turtles. Read more on Dennis here.

Last year we released Robot Turtles, which teaches kids 4+ the basics of computer programming. This year, we’re taking it up a notch with our new coding game, Code Master (available exclusively at Target), which teaches kids 8+ to think like a computer – the skill that, according to inventor Mark Engelberg, is the most important for preparing your child to learn to code. Check out the video below to learn more about Code Master, and if you’re interested in hearing all of Mark’s thoughts on the state of CS education and how to fix it, subscribe to the blog – that’s coming soon, you won’t want to miss it.

Want more on coding for kids? Click here to learn if Scratch and Hour of Code can help your kid Learn Programming! 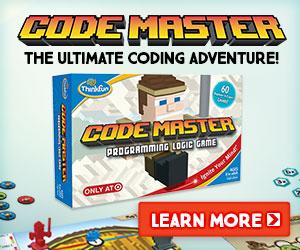