Summer is fading away, and leaves will begin to change colors as fall approaches. One of my favorite memories from childhood is crunching the acorns as they fell to the ground. The days will begin to feel crisp and cool as the blazing hot temperatures fade away. Homework is probably becoming a part of a steady routine as school resumes, whether your school is distance learning or learning on site. Games provide a welcome relief to a familiar routine, and some games provide educational value without changing any rules! How’s that for a fun, entertaining night? Below are a few suggestions from my game closet. The games that are suggested below are well worth a full-price buy. If budget is a concern, use these for birthday and Christmas gifts. Azul is a tile-drawing game where players take turns choosing tiles and placing them in strategic places on their boards to score more points than their opponents. The game comes with two-sided boards and a bag of tiles. The tiles are arranged on the circles as shown in the pictures. Each player then chooses the same color tiles on their chosen circle and discards the rest in the center. The goal is to score more points than the opponents by building patterns on the given boards. Points are earned for completing horizontal rows, vertical rows, and by placing all of one particular tile on a board. Rules must be followed for tile placement. There are rounds to complete, and once a player finishes a horizontal row, the game is over. Scores are accumulated, and the highest score wins.

In the beginning, the game looks a little confusing, but there are YouTube videos to help with game play. The game teaches strategy. The game plays fairly quickly (within 20 minutes) and makes for a fun addition to game night! Not only is Lost Cities an incredible math tool, but the game is full of strategy and fun. Basically, there is a story line about two explorers who are taking expeditions to different parts of the world. But the story line is soon forgotten as players battle it out to finish their expeditions without going negative in points! This is a two-player game where each player is dealt 8 cards each. Players play or discard cards, one at a time, beneath the appropriate color on the board. After a player plays or discards a card, another card is drawn. Each player plays on their respective side of the board. Cards are played low, e.g., 2, because there is a rule that once a number has been played, a player cannot play a lower number in that column. For example, a player cannot play a 5 on top of a 7. As cards are played, the cards must increase in number value. Therefore, the strategy becomes to score a least 20 points in each column played, because at the end of the game, 20 points are subtracted from each column for expedition costs. Game play continues until the drawing deck is depleted. The strategy becomes to accumulate enough points in each column before the deck is depleted, because a player can go negative in some columns. Here is where the math comes in! Each column is scored according to the face value on the cards. If a column goes negative, that score adds in with the other columns and scores, reinforcing pre-algebra skills with positive and negative numbers! There is also a rule where a special card can be played at the beginning of each column. The special card multiplies the score for that column, but if the column is negative, the negative score is multiplied!

I cannot recommend this game enough! This is such a simple game to learn, yet the game is packed with strategy and math, all while competing with your partner to achieve the highest score.

Patchwork is another two-player game that is so fun that I bought two copies. My 19-year old son played this with me recently and loved it! This one is a geometry-type game where the pieces can be flipped and turned around to fill up a grid-type game board. The game begins by placing the pieces around the game board so that players can choose which pieces they want as game play proceeds. The game comes with different values of buttons, which are used as money to buy the game pieces. The goal is to fill up as much space as possible on one’s game board before the game ends. The game ends very quickly, which makes this game play challenging and fun at the same time. The more spaces filled in, the less points deducted. The more money (or buttons) one has at the end of the game also adds to a player’s score!

I highly recommend spending for this one. The price is a little more expensive, especially if two copies are bought, but the game plays quickly, is fun, and academic skills are reinforced and taught. Money, in the form of buttons, is exchanged for each player’s turn. And pieces are flipped and rearranged providing an excellent geometry lesson! The rules are also very simple to follow. 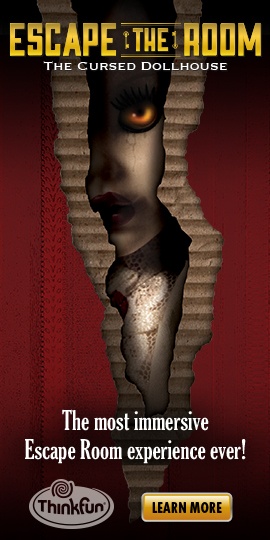